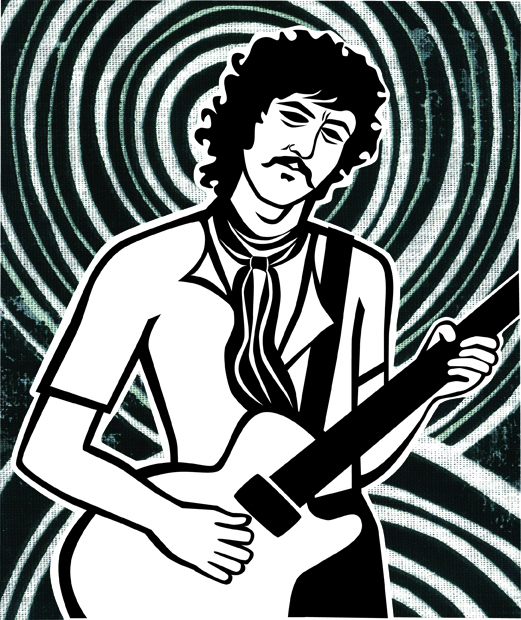 My book Crossroads is filled with sad stories, ranging from drug overdoses to a literal castration, but for me, the most heartbreaking is the tale of Peter Green, the subtly brilliant guitarist who created Fleetwood Mac. Green’s first big break was to replace Eric Clapton in John Mayall’s Bluesbreakers, and he surprised everybody by proving himself to be an equally masterful guitarist. His girlfriend at the time attributed his emotional touch to the childhood taunts he’d endured for being Jewish. “Quite obviously the scars were still there,” said Sandra Elsdon-Vigon. “The blues to him are Jewish blues.”

When Green left Mayall’s band in 1967, his original plan was to move to Chicago and play in a blues band. Instead, he stayed in London and formed a Chicago blues band with the rock solid rhythm section of Mick Fleetwood on drums and John McVie on bass. Naming his new band after its rhythm section wasn’t Green’s only act of modesty; he also enlisted singer-guitarist Jeremy Spencer to avoid what he considered the self-indulgent virtuosity of Eric Clapton’s power trio, Cream. Green and Spencer represented two sides of Fleetwood Mac, with Green fiercely disciplined and Spencer defined by his curly locks and rowdy, Elmore James-styled slide guitar. Here’s Fleetwood Mac on French television, with Green singing an Otis Rush song, “Homework.”

Fleetwood Mac became hugely successful in Britain and topped the charts with a wistful instrumental called “Albatross.” The band’s first two albums (released in the U.S. as Fleetwood Mac and English Rose) are among the best of all British blues albums. The early Mac song that everybody knows is “Black Magic Woman,” famously covered by Santana, and it’s easy to see the influence Green’s laid-back style had on Carlos Santana. By the band’s third album, Then Play On, rockier tunes began to infiltrate the repertoire. One of the best was the percussive guitar jam, “Oh Well.”
Do you think Hugh Hefner got the wink-wink, nudge-nudge joke when the band played “Rattlesnake Shake” on his television program, Playboy After Hours?
The original Fleetwood Mac would implode by 1970. Green felt guilty for the monetary success that music brought him, and became restless when his band mates rejected the idea of giving most of their money away to charity. Finally, after taking a particularly bad acid trip in Munich, Germany, Green announced that he was going to quit the group. Green’s mental state deteriorated during the 1970s, and he was eventually committed to a mental institution where he was subjected to electroshock therapy. Meanwhile, Fleetwood Mac, who by now included Lindsey Buckingham, Stevie Nicks, and Christine McVie, was becoming one of the biggest bands in the world. In the late-1990s, friends helped Green establish and record with a band called Splinter Group. But his gift was gone, and it was his life, and not his music, that had become Peter Green’s most vivid expression of the blues. Here’s one last example of what was lost:

John Milward has written about music and popular culture for more than forty years, contributing to such publications as Rolling Stone, the New York Times, the Los Angeles Times, the Boston Globe, and No Depression, among many others. He is the author of "Crossroads: How the Blues Shaped Rock 'n' Roll (and Rock Saved the Blues)" and "Americanaland: Where Country & Western Met Rock & Roll."