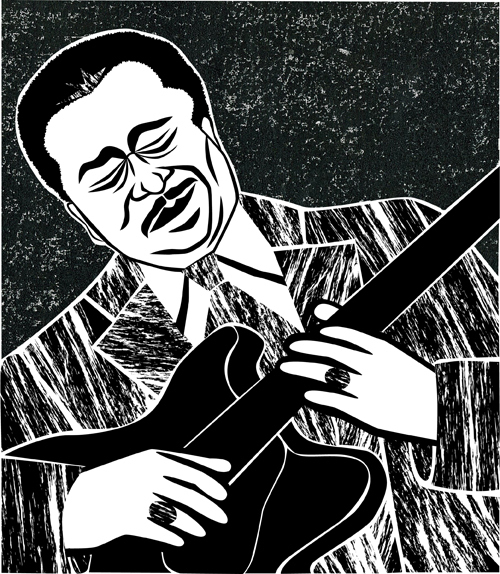 It takes a mighty, mighty man to blow out 88 candles on a birthday cake. That’s as many candles as there are keys on a piano, and 82 more than the strings on a Gibson ES355 electric guitar. But you can be sure that sometime on September 16, 2013, B.B. King will take a deep breath and extinguish the candles that represent a monumental life during which he’s reigned as the King of the Blues.

Over the years I’ve spent writing and researching Crossroads: How the Blues Shaped Rock ‘n’ Roll (and Rock Saved the Blues), I couldn’t help but wonder if B.B. King would be alive upon its publication (Margie Greve’s portrait of B. is one of 19 in the book). The life of B.B. King is virtually the only through-line in the book’s narrative, which runs from the Mississippi Delta of King’s youth through the blues revival of the 1960s and the last four decades that has seen the influential singer-guitarist recognized as a cultural icon.

Arriving in Memphis in 1946, King bunked with his musician cousin, Bukka White, and found work hosting a radio show on WDIA, the exposure helping to promote his live performances. He recalls his first gig at the 16th Street Grill in Memphis: “That night I couldn’t sleep for the pictures running through my head. I saw them [women] dressed and undressed, bending over and stretching, grinding and grinning and showing me stuff I ain’t ever seen before.” B. likes women almost as much as music.

King recorded his breakthrough hit, “Three O’Clock Blues,” in 1951, and spent the rest of the decade traveling the chitilin’ circuit of black clubs and theaters; in 1956, he played an unbelievable 342 one-nighters. One can only imagine the music that went down during those days, but this extended performance from the 1960s showcases a superior bandleader who’d found the perfect balance between his full-bodied vocals and supple lead guitar.

It was during the 1960s that King began made his presence felt beyond the black community. White blues-rock guitarists like Eric Clapton and Mike Bloomfield sang his praises in rock magazines like Rolling Stone, prompting rock hounds like me to seek out the King album regarded as a style-defining classic, Live at the Regal. Such exposure was vital for King, who like such blues peers as Muddy Waters and Howlin’ Wolf, were losing much of their black audience to the contemporary stars of soul and rhythm & blues.

In February of 1967, King arrived to play on a bill with the Steve Miller Band and Moby Grape at San Francisco’s Fillmore Ballroom. King was unnerved to play for a crowd of hippies, but was touched by promoter Bill Graham’s introduction: “Ladies and gentlemen, I bring you the Chairman of the Board, B. B. King.” Bringing his blues to a new audience-- Carlos Santana was just one of the soon-to-be rock stars in attendance-- turned out to be a life-changing experience. “They didn’t seem to look at me as B.B. King, the blues singer,” he said. “It was B.B. King, the musician.” King was welcomed as a VIP at after-hours jam sessions. YouTube has a number of recordings of King playing with Jimi Hendrix, though he’s all but lost amidst Hendrix’s high-volume assault. More characteristic of King’s style is a jam that also features Paul Butterfield on harmonica.

If King’s career was transformed by playing rock ballrooms, it also set the table for bigger-budgeted studio sessions that paid off with the 1970 release of “The Thrill Is Gone,” a career-defining performance that cemented King’s reputation as a true giant of American musical culture. Here he’s performing the song at a 1974 all-star concert in Zaire, Africa, produced in conjunction with “The Rumble in the Jungle” between George Foreman and the Muhammad Ali.

B.B. King has been blessed to live half his life as a celebrated ambassador of the blues, touring the world, performing on television, opening blues clubs, and recording with everybody from U2 (“When Love Comes to Town”) to Eric Clapton (Riding With the King). As a popular artist who's been comfortable growing old on the public stage, he's also served as a role model for musicians who grew up in a culture defined by youth. Nobody cares that he now mostly performs while seated. Indeed, whenever Eric Clapton periodically organizes one of his Crossroads festival, devotees of the King are happy to pull up chairs and trade licks with the man who's taught them valuable lessons in both life and the blues.