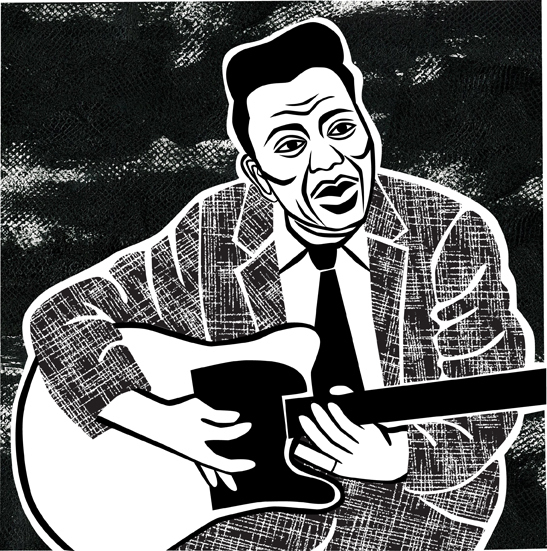 Determining who wrote a vintage blues song can be akin to casting a fishing line into very muddy waters. That’s because in the early decades of the last century, blues was an oral tradition, with songs and lyrics and guitar licks passed from one musician to the next. Such a transformation mirrors the musical story chronicled in my new book, Crossroads: How the Blues Shaped Rock ‘n’ Roll (and Rock Saved the Blues). As Dave Van Ronk, a master of the folk-blues, once said, “Theft is the first law of art, and like any group of intelligent musicians, we all lived with our hands in each other’s pockets.” Added folklorist and song collector Paul Clayton: “If you can’t write, rewrite. If you can’t rewrite, copyright.”

A vintage 78 rpm disc might give writer’s credit to a particular blues singer, but unless the song was copyrighted, he was unlikely to ever see publishing royalties. Talent recruited for so-called “race records” rarely thought in such terms, and typically took a one-time cash payment (Lightnin’ Hopkins did this throughout his long career). Skip James was paid $40 for the 18 sides he recorded for Paramount in 1931, and his songs weren’t copyrighted until his rediscovery in the early-‘60s. (James came into a late-life windfall when Cream covered his “I’m So Glad” on Fresh Cream; his heirs got serious scratch when “Hard Time Killin’ Floor Blues” was included on the soundtrack to 2000’s O Brother, Where Art Thou?)

Robert Petway recorded “Catfish Blues” in 1941; he was cited as the writer but blues researchers say the song had circulated around the Mississippi Delta and was in the repertoire (and perhaps composed by) a singer of his acquaintance, Tommy McClennan. Whoever wrote it, however, borrowed a lyrical motif found in a 1928 hit called “Jim Jackson’s Kansas City Blues Part 3” by a medicine-show entertainer named Jim Jackson (“I wished I was a catfish, swimming down in the sea; I’d have some good woman, fishing after me”).

“Catfish Blues” barely caused a ripple commercially, but it was no doubt familiar to one of Petway’s Delta neighbors, Muddy Waters, whom Alan Lomax recorded that same year for the Library of Congress. Muddy brought the song with him to Chicago, and cut it for Chess in 1950 with his ringing electric guitar representing a clear bridge from the country blues to the sound of the city. Muddy moved the “catfish” lyric to the top, added some new words, and put his name on a song whose title he changed to “Rollin’ Stone.” Here’s Waters playing the tune about a decade later, and not long before a British rhythm & blues quintet who idolized Muddy decided to call themselves the Rolling Stones.

Many others have covered “Catfish Blues,” with B.B. King giving Petway writing credit, John Lee Hooker taking it for himself, and Jimi Hendrix citing the song as a traditional. Hendrix undoubtedly learned the song via the Waters recording. “When I was a little kid,” Hendrix told Sharon Lawrence, “I heard a record playing at a neighbor’s house turned way up. That song called to me, and I left my yard, went down the street, and when the song was over, I knocked on the door and said, ‘Who was that playing?’ ‘Muddy Waters,’ the guy said. I didn’t quite understand. He repeated it and spelled it out—‘M-u-d-d-y.’”  For Hendrix, "Catfish Blues" was also a launching pad for "Voodoo Chile" and "Voodoo Chile (Slight Return)." Here's a live version of the later (from London's Royal Albert Hall) synched to footage from the Woodstock festival:

At a recent reading/concert to celebrate the publication of Crossroads, which includes 19 original portraits by Margie Greve (including the Muddy Waters on this page), I performed the song with guitarist Josh Roy Brown, who was confused when I introduced the tune as “Rollin’ Stone.” “I thought we were playing ‘Catfish Blues?’" said Josh. And so we did.

John Milward has written about music and popular culture for more than forty years, contributing to such publications as Rolling Stone, the New York Times, the Los Angeles Times, the Boston Globe, and No Depression, among many others. He is the author of "Crossroads: How the Blues Shaped Rock 'n' Roll (and Rock Saved the Blues)," and at work on "Americanaland: Where Country & Western Met Rock & Roll."