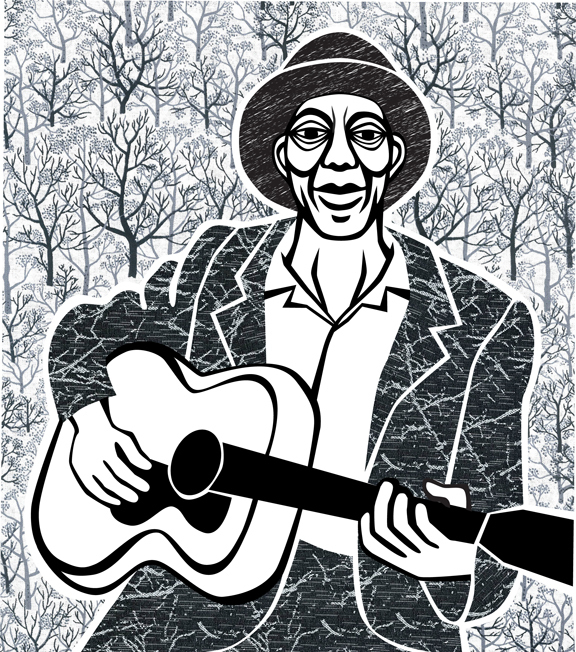 Mississippi John Hurt was the sweet soul of the blues revival of the 1960s, and the first of a trio of bluesmen who walked straight from Mississippi Delta obscurity onto the stage of the Newport Folk Festival. Hurt recorded for Okeh in the late-1920s, and was best known for a pair of tunes that appeared on Harry Smith’s influential 1952 collection, Anthology of American Folk Music. A select few, however, hunted for Hurt ‘78s and traded tapes of his recorded repertoire. The interest of Tom Hoskins was particularly piqued by a little-known tune called “Avalon Blues” in which Hurt sang,  “Avalon is my hometown, always on my mind.”

After consulting a vintage map of Mississippi, Hoskins found a speck of a town called Avalon, and on a whim and a prayer, set out on a journey to past. Pulling into town, he stopped at Stinsons, a combination general store, gas station, and post office that constituted downtown Avalon. Inquiring if John Hurt was still alive, Hoskins was told, “If he ain’t died since he went that way with two sacks of groceries at eleven o’clock this morning.” At Hoskins’ urging, Hurt moved to Washington, D.C. and embarked on a most remarkable second act. The discovery of John Hurt encouraged other gumshoes to search for old bluesman, and soon Hurt was joined on the contemporary stage by two other Delta legends, Son House and Skip James.

But Hurt was hardly your typical blues musician. “When you think of Mississippi Delta blues,” said Stefan Grossman, “you think of a type of music that has nothing to do with John Hurt. He’s playing as if the guitar is a piano with a boom-chick in the bass imitating the left hand of the piano player and melody on the treble strings like that played by the right hand. There are no extra notes in his music, there is just the sound, and the sound is rooted in his thumb.”

John Sebastian found a name for his group in the lyric to Hurt’s “Coffee Blues”—the “Lovin’ Spoonful.” “What I heard in the music of John Hurt,” said Sebastian, “was that it was more swinging than a lot of the finger picking that I had heard up to that time. His groove was just deeper, and yet when he’d talk about his playing, he’d made it sound so simply. ‘Well, you get your thumb doing this,’ he’d tall me, ‘and then you got these fingers left over so you can kinda get a little melody going on that.” Here’s another example of his sublime style:

“Some of the rediscovered bluesmen were exploited,” said Geoff Muldaur, “and very few of them made sense of the rediscovery. John Hurt is an example of somebody who did. They rediscovered him, he smiled, and started to play until he died. A lot of those guys were bitter and sad and a lot of them were drunks. But John Hurt was really the quintessential wonderful guy.”  In the early 1960, Muldaur was friends with Phil Spiro, a Cambridge disc jockey who was among the trio that found Son House living in Rochester, New York; Spiro also shared an apartment with Al Wilson, who would later form Canned Heat, and who sometimes played with both House and Hurt. On this tape from October 1964, Spiro invites Mississippi John Hurt and Skip James into his studio for a live performance during the heyday of the blues revival.

The portrait of John Hurt is by Margie Greve, one of 19 original illustrations in our new book, Crossroads: How the Blues Shaped Rock 'n' Roll (and Rock Saved the Blues).